American idiots: the Electoral College is made of Humans to make Moral Decisions 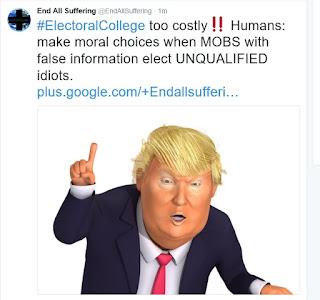 American idiots:
They (the electoral college) are not mere numbers, and they well could be just that, but humans to make moral decisions when veritable mobs of misinformed and mislead people elect completely unqualified demagogues to our powerful leadership! Humans not numbers, get it?

Anyone else (besides Donald J. Trump) at a time like right-now  would be thoroughly investigated to rule-out whether or not he were an actual Russian agent. But no. Here we go. We know very little about him. He may have met with an agent of Vladimir Putin, or with the Russian president himself in the many months to recent years prior to choosing to announce his run.

That would be consistent with all that we know and have seen so far and those are the exact kinds of circumstances that the FBI would pursue an investigation against anyone of us - with less extenuating circumstance.

The circumstantial, when based on multiple in context visible relationships is the evidence we use to send thousands of people to prison with every year. Many are convicted only on the circumstantial. I would wager that there exists a physical trail within the documented life of Donald J. Trump of collusion with the Russian government, and possible direct affirmation that they would be helping him to win.

The people he’s near recently are Russian connected and this fact remains to fuel the suspicion that he should be a suspect. He needs a Moscow Hotel; his Secretary of State’s company (Exxon) could gain half a trillion dollars in business of arctic oil drilling if the US lifts economic sanctions against Russia.

His tax returns may indicate a direct payoff (for consultation) with/from the Russian government. We may never know.