Hey what is a Lie Anyway? 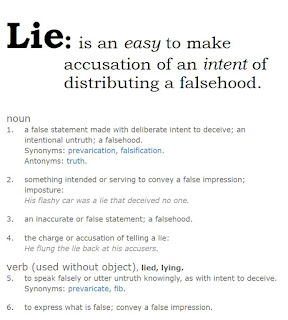 I have hoped and wished for someone to use their media moments to speak up about our absence of an important - kind of childish, grammar lesson about using the word “lie.”  We abuse it to a degree that we have forgotten and in so doing have abused it’s best definition;  exploitatively. From Dictionary.Com:


“A false statement made with deliberate intent to deceive; an intentional untruth; a falsehood.
Synonyms: prevarication, falsification.
Antonyms: truth.”
As a civil society practicing democracy, we’ve blown-it when we haphazardly throw accusations that have no evidence at our candidates seeking to represent us. At home and at work we treat each other this way and it is horrible communication and could be a causality of the destruction of a healthy democracy and its use as weapon of communication should be considered inappropriate in any discourse regarding anyone.


We don’t preposition its’ use with qualifying language that makes the accusation reasonable as an opinion. We toss it out like a true object of solid matter at those we have bias against. It is immature and defeating to all sides.


The accusation of a lie is largely an indignant and empty of substance, diminutive assault on anyone disliked by anyone.Using it as an accusation is in the majority of cases an baseless abuse of its meaning. We need to cut-this-out. We need to make strong words like this important again and not 99% baseless assault.


See that half way down this page [LINK], 4 out of the 5 examples taken from a search of the Daily Beast are headlines using the word lie as an accusation. You can bet; each accusation would be proven to be false, as empty of any evidence of intent to knowingly tell a distruth.
http://www.dictionary.com/browse/lie

Alternate titles:
Accusation of a Lie is More Likely to be One
Lie is an Abused Word of a Concept that Should be Important to Democracy 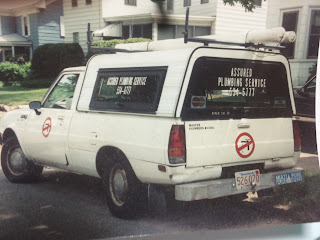 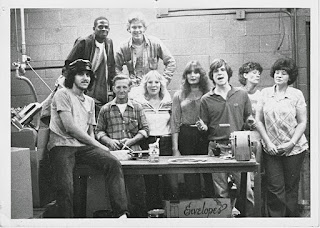 You Can’t Row the Boat if You Don’t Vote

This republic was an idea long brewing. My aunt just engaged in a text conversation with me from behind a 4 brick thick 245  year old dungeon walls near the Capitol building. Inspiring.  The cemetery nearby holds the dead from several battles and the Civil War.

In remembering history and “why we fight,” our historians sometimes find the words of the soldiers, from some interview or if lucky the soldier could write his own journal. But I have never read any of those infrequently found words where a simple answer was requested of the simple question: Why are you fighting this war?

History is rife with those who see our causes for submitting ourselves to life and death risk for a governmental change - differently. Those differences may vary wildly. However, I am of the opinion that the most common of those, who were in the frontlines of battle by the masses, from all over the regions involved are those who answer history’s question the best.
Here is a speculative answer from a young man, whom I visualize and entertain was lured into the cause of separation from Britain and all that that separation may have meant to him:
“The bloody British are fu*ks. Rapists and pillagers. Bloody King George. Don’t provide us sh*t.  I can’t get enough work to have land of my own. They said we’d be paid 8 pence a day and the indians are a problem and the Reds don’t help enough.” The young man was ignorant. He was illiterate like everyone else he knew. He and his peers could have been told almost anything to inspire them to arms, to bloodshed. But his statement becomes history’s true reason for war. Not necessarily what those in control of the media of the day managed to feed into the scantily literate public.

“It is written.”  Was a cliche statement that cemented truths into conversational statements of the news of the day. To many, it was as if an absolute. The colonists were not apart from this common understanding. Common was the person of the colonies. Not powdered. Not literate. In my primary education in the 1960s I learned the beckoning call, that likely came from popularly read periodicals or a major newspaper:
“Taxation without representation!”
However, that was not common understanding. That was history’s writers getting the jump on the common person. It was partially true. But the King’s representation was slow in adapting and powered gentry of that government were too different from us. They were failing our fast developing and adapting peoples.

That young man’s sacrifice, whether he did it for the 8 pence or not, doesn’t have to happen again if we participate in what he was fighting for - really. The right to be represented by a trusted body that can protect you and provide for your common welfare when the individual is unable. Because together we fare best. That young man was disenfranchised from the government of Britain. He felt very different from them in both culture and needs. Separation was inevitable as the feelings of persons like him became the call to war as they were communicated for him by the few literate in brick homes throughout the colonies.

Right now we face disenfranchisement of our feelings. The call is not to war but it appears to be a plea, as if a last chance, to vote us into change. That statement I created of that young man can have our modern words inserted. We use metaphors that transmit the times, in place of his diatribe, of rapists and pillagers, we include our most dramatic words about our now huge government. Imagine this metaphor: If you don’t vote you are being the dirt the soldiers crossed to risk their lives and nothing of any more significance.  You are lending to our future the need to take up arms. Bloodshed for our failure to participate. If you don’t get in that boat on election day, you can’t be substituted for; I can’t represent you when I go to the polls in November. I don’t know you. My culture may be very different from yours. Wildy different?