I Know What I'm Talking About - All Neanderthals Are The Same

Comedy in the hope of presenting bigotry and racism as it may be if the Neanderthal had survived to live beside us, or god forbid near us?! 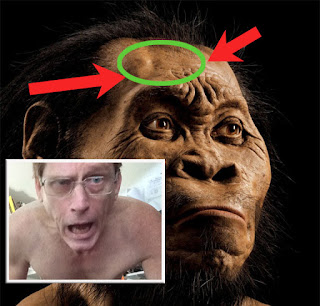 I know what I’m talking about! Neanderthals don’t know what merge means: they’ll stop at end of the highway entrance ramp and wait, then jump out into the right lane and screw-up everybody . .
#comedy #bigotry #racism

You can always spot a Neanderthal at the airport; they’re they guys standing in the middle of the Drop Off lane in front of the terminal and kissing for 10 minutes. They’d hump in the bathrooms if they could! Animals, really.

I know what I’m talking about! Neanderthals are the guys holding-up the movie theatre line because they’re trying to get a Senior Citizens discount and claiming they don’t have their f-ing ID’s.

I know what I'm saying.

Neanderthals: They all want to have lots of kids. It’s one of the reasons they went extinct, the stress. Sometimes you’ll see em 6 or more in a van, hogging up the carpool lane, watching tiny movies.

I know what I’m talking about!
All Neanderthals hide their typical neanderthal small foreheads with comb overs or big hats and think they can run things but always fu_k up and file bankruptcy.

The thought of homosapiens having sex with #neanderthals is disgusting. Hairy limbs and fingers intermingling with our people's flesh! These #archeologists are trying to rewrite history with their physical evidence. I say BS!

I know what I’m talking about!
Neanderthals all park their cars at f_ked-up angles and expect the next guy to begin the trend to straighten-out the parking lot.

A Neanderthal approaches a problem presuming the effect is a cause of the issue. They’ll write and say things that rationalize a solution that does very little to stop the problem’s cause. Like #DonaldTrump, most #conservatives and #Republicans. #comedy

One more thing I almost forgot: Your basic #Neanderthal cannot stand to be near peanut butter. Because peanuts grow in one place out of the ground; that freaks them out. They’re nomadic; the primary reason they’re all dead. #comedy #racism #bigotry