The Devil's Leg Building in Manhattan gets Roasted

1) I'm pretty sure this Devil's Leg building sprung forth from the center of the Earth around 06.06.06. 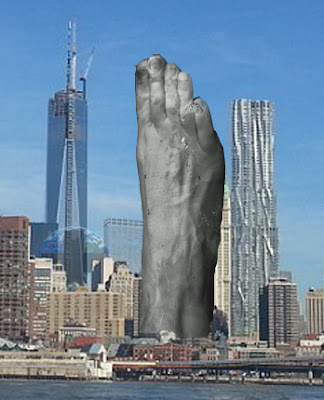 2b) Or anyone who’s seen the Exorcist.

2c) $10 says you can’t find anyone living there who's suffered the years long healing of a 3rd degree burn.


3) The original name had been Antithesis to Freedom Tower.

4) There is a money trail in financing this monstrosity that leads to 19 guys in Saudi Arabia.

5) I’ve got it! A scorned woman designed this. But I’m pretty sure my ex wife is still on the west coast.

7) The architect knows the screenwriter of the soon to be produced Rosemary’s Baby II.

8) Wrapping was supposed to be removed - only by the owner. Renters inside have been pushing on it.

9) The designer’s name is Damien.

10) What happens when you spend $10 million on Trump building anti aging cream.

11) Sigourney Weaver is living in the penthouse. 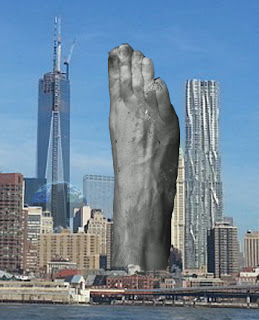 12) Those disgusting wrinkles are not for wind shear reduction.

That’s for rocket fuel. That’s how Trump is going to escape Mueller.

13) The skin gets smooth and tight when the building gets taller and harder at night when we can't see it.

14) It is shoving. As if the designer could foresee Trump’s treatment of our allies.

15) Inspired by spending three hours in the shower.

16) Feels like thousands of tiny butterflies to Mrs. Kong.

18) It is a middle finger to Lady Liberty. 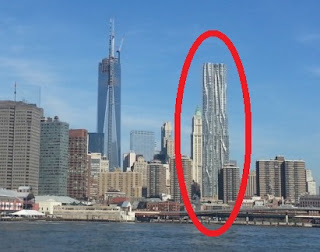 19) The TAS has found their first target (Terrorists for Art's Sake).

20) New name: Gentrification Tower.
it's going to knock over those little guys. Kick em out.

21) On opening day the large banner on top read: “F_ck You Bridgers!”

23) Behemoth, rippling monolithic work from the darkness of the minds of architects, designers and city planners of NYC!

25) Got it! This is a time travel thing. It’s Pedal Displacement by Different Humans Choices in Another Timeline!

It was after his dunking crucifixes in urine phase. What’s his name?

28) A shining (sort of) testimony to unrefined metals and the slave labor that allowed capitalists to exploit it.

29) A rich person lives at the top of each bubbling ripple. In an emergency they jump through the window, grab on and it peels down to safety.

30) Conclusion: If any #TVproducers want to make a #filmcritic show with one #evilcritic and the other a nice person critic; call me.

32) This appearance does grow on you.

Seriously. 33 tenants got it already. The dreaded Silver Skin.

It took me years to acknowledge that the Elephant Man could have a loveable face.

35) I’m thinking solutions so to not get killed by the owner . . hmm

Owner should challenge #spacex to put it in orbit.

36) Owner: I’m stopping this roast of an inanimate object (or is it?) after 100 because billions have to view the beast.

First ripple was to hide the body. The others were partners that found out during construction. I knew it.

Sub:
#climatechange image reminds: someone needs to commit to writing the years on buildings so the fish people can see the sea levels recorded.

38) The #architect is a secret online poopaphile.

He took a picture of his champion sized turd and this is what it looks like.