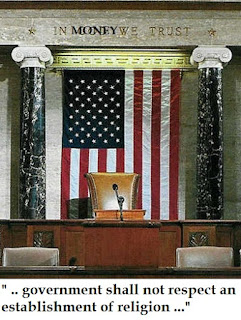 Mostly notes thrown down. Sorry anybody, I've been very busy with another project, now a job.
04.02.2020 IN THE CORONA VIRUS BAILOUT of Trillions, there is BAILOUT cash for FAITH based organizations. ANOTHER BLATANT OFFENSE to the very SPIRIT of the First Amendment. My GOD!!!
Don't they solicit donations?? That means the money for the people would go to the anyway, if their faithful wanted to. And, it brings them closer to the Federal Government, VIOLATIONS!.


#USA claims #ReligiousFreedom, because religion is protected, to be free form a government that restricts the ability to PRACTICE. I WILL FIGHT for the faithful's right to practice, but NEVER to get validation from the government. "SHALL NOT RESPECT an ESTABLISHMENT of RELIGION." #1A

Beyond the bullshit / the real issue / what happens: Christian conservatives were formed as that political label because a fringe activist element of American Christianity became collectively disrespected (the feeling of disrespect). because they did not see their government validating their beliefs (because the American government is NOT supposed to).

They witnessed culture not doing so, regularly, and the freedoms of the Bill of Rights meant they were not allowed to discriminate or teach the Bible in school, or refuse a gay wedding cake if they want a public business, or... on an on and on, they have not stopped trying to make America Christian.

We are not supposed to have a national faith. We are supposed to ALLOW freedom to practice to ANY religion. Never allowing the appearance of a government that favors any one faith. The first amendment of the Bill of Rights is clear, unlike many others, it is adamant that the US government not pander to any religion.

We fucked this up badly. The founders were not clear enough, apparently, for those whose feelings of faith appear to be disrespected. They are LUCKY to be here, where their ability to practice is never restricted.